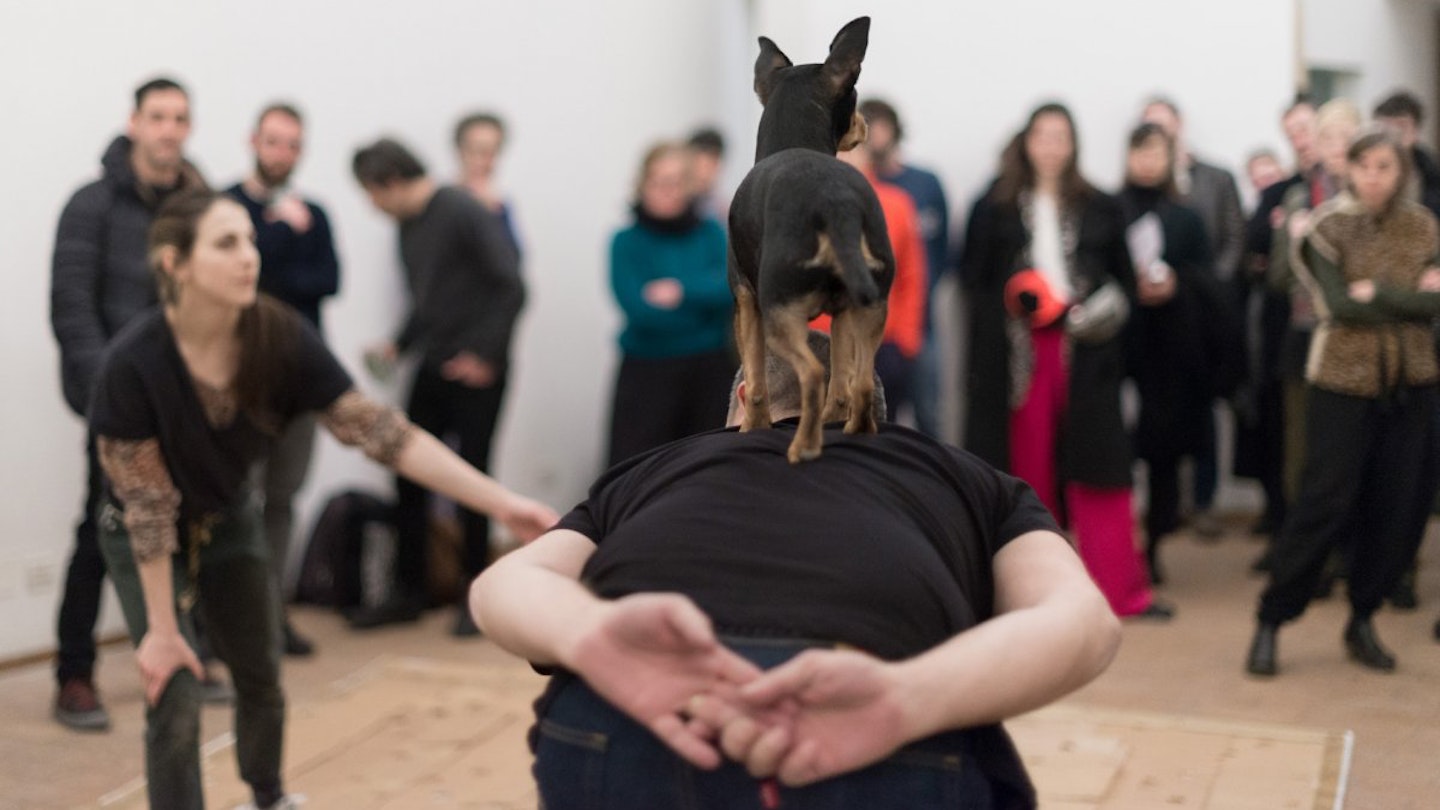 Barbara Berti, together with Marco Mazzoni and Kareth Schaffer, begins the creation process with an audition for dogs. The performance brings the human animal and the non-human animal together in a safe environment that contemplates different perceptions. Ideas of fun, play and fighting induce participants to navigate instantaneous and interactive choreographic flows. The performers map and structure the space both through intimate acts of presence and the positioning of objects; blurring the boundary between animate and inanimate and continuously deconstructing the ‘situation’. The Situation draws on Donna Haraway’s suggestion to rethink the relationship between species and to “be able to join another, to see together without pretending to be another”. It assumes the unpredictable and insecure threshold in which the continuous construction and destruction of a place are both relational and empathetic. Within it, physicality is a radar, a language to communicate spatially. An expression of the territory and not of identity.

A ritual to connect people beyond cultural, social, or language boundaries; a space of inclusion of all the possible beings, within the lack of social structures. Belonging to a pack, belonging to their own being, belonging to the beings.

Barbara Berti is an Italian choreographer, dancer and performer. Born in Bologna, she works between Italy and Berlin. After an initial training as a graphic designer, she moved into the performing arts, working with artists, performers and dancers such as Judith Seng, Tino Seghal, Gabi Schilling and Isabelle Schad. At the same time, she developed her own artistic key in contemporary dance, developing a personal choreographic language with the help of hybrid disciplines such as instant composition, body-mind centering, meditation and contact improvisation. In her creations, a key aspect is research into kinaesthetic empathy and the transmission of the performer’s physical experience in a strong interaction with the audience. In 2014, she won the jury prize at the 100° Berlin festival with I am a shape, in a shape, doing a shape, selected in 2016 for the Vetrina italiana della GD’A (Italian Showcase of Young Dance). In 2017 she wins in ex-aequo Premio Scenario award with BAU#2, from the series Choreography of thinking. Since 2016, she has been supported by TIR Danza.
http://ackerstadtpalast.de/Events/THE-SITUATION-DOGOD
https://barbaratopi.wordpress.com/